Cutting Edge Optronics has developed a family of arrays for high-power QCW operation. These arrays are built using CTE-matched heat sinks and hard solder in order to maximize the reliability of the devices.

The life tests demonstrate the high level of reliability of these arrays in a number of operating regimes. For single-bar arrays, a MTTF of 19.8 billion shots is predicted. For four-bar samples, a MTTF of 14.6 billion shots is predicted. In addition, data representing a large pump source is analyzed and shown to have an expected lifetime of 13.5 billion shots. This corresponds to an expected operational lifetime of greater than ten thousand hours at repetition rates less than 370 Hz.

Diode-pumped solid-state (DPSS) lasers are used in a wide range of industrial, scientific, and military applications. The applications include ablation, cutting, welding, range finding, bathymetry, and numerous others. Each of these applications requires different qualities from a DPSS laser, with wide variations in pulse energy, duration, and beam quality within the application space.

Historically, high-energy pulsed DPSS lasers have been obtained by Q-switching a laser medium, such as an Nd:YAG rod or slab, that is pumped by continuous-wave (CW) laser diode arrays. However there are many benefits that can be obtained by using a pumping scheme that utilizes quasi-continuous wave (or QCW) laser diode arrays. QCW laser diode bars can operate at higher peak powers than their CW counterparts. In addition, multiple high-peak-power QCW bars can be packaged into the same area as a single CW bar, due to the lower average waste heat of each bar running in QCW mode. These factors combine to enable compact diode pumps with very high peak powers when operating in QCW mode. In addition, QCW pumping can reduce the heat load in the laser gain medium, which tends to reduce thermal lensing effects and improve laser beam quality.

Northrop Grumman Cutting Edge Optronics (NGCEO) has manufactured CW and QCW laser diode bars and arrays for over a decade. Recent improvements in array packaging and bar manufacturing processes have enabled NGCEO to produce QCW laser diode arrays with lifetimes greater than what is required by industrial applications.

NGCEO has developed a family of high-power QCW arrays for use in applications which require long lifetimes (over one year of continuous operation). These arrays utilize the same technology that was developed for high-power military and industrial applications that are subject to harsh operating environments[1]. Two things are required to achieve long lifetimes in QCW arrays: (1) a robust laser diode bar designed for QCW operation and (2) array packaging based on hard solder. These two items combine to create arrays with high reliability.

NGCEO utilizes an 83% fill factor bar for the majority of QCW applications. This bar is specifically designed for high-power operation and is used in applications with output powers ranging from 60-230 Watts/bar at 808 nm. Higher output powers are available at higher wavelengths. Power and efficiency as a function of current for a typical 808 nm bar are shown in Figure 1. This data was obtained at 20 Hz, 150 μs on a conductively-cooled mount.

Some of the major historical limitations to QCW array lifetimes have been the processes and materials used to package the laser diode bars. Historically, soft solders (e.g. indium) were used in multiple locations in the array. Arrays built using soft solders are prone to packaging induced failures from solder creep. Advances in packaging methodologies at NGCEO have enabled the creation of the Golden BulletTM product line. Golden BulletsTM utilize eutectic AuSn solder and CTE-matched heatsinks to create a package that is less prone to solder creep, and therefore offers much higher reliability and product lifetimes.

A generic representation of the assembly method used for these devices is shown in Figure 2. Diode bars are initially soldered to CuW heatsinks with AuSn solder using a proprietary process designed to generate low-stress bonds and lowsmile bars. The resulting part is called a Mounted Bar Assembly (MBA). The MBAs can be individually tested and binned for wavelength based upon the requirements of the application. The MBAs are then soldered together and attached to a BeO backplane and n- and p-side contacts in a secondary operation, resulting in a Golden BulletTM package. The Golden BulletsTM can then be attached to a wide variety of standard and custom heatsinks based upon the customer’s needs. They are suitable for use in water- and conductively-cooled applications.

The samples were soldered onto water-cooled heat exchangers and characterized on NGCEO’s NIST-traceable laser diode test station. They were then loaded into NGCEO’s automated life test station – the devices were not burned in prior to this test. The drive current was supplied to the samples by an NGCEO eDrive laser controller. The output power of each device was measured every 90 minutes (approximately 4 million shots) by the life test station and saved to a log file. The life test results are shown in Figure 3. Three of the 15 four-bar samples experienced infant mortalities – all three failed at less than 8 million shots – and are excluded from the data. Therefore the data represents the expected performance of devices shipped by NGCEO, since infant mortalities in production arrays are screened out by an established burn-in process.

As of late December, 2009, the samples had accumulated approximately 9.1 billion shots. There had been no COD failures of any diode bars (excluding infant mortalities), and all samples are aging gradually. The distribution of degradation rates is much tighter for the four-bar samples. This is expected since those samples already represent an average of four bars, so bars with high and low degradation rates tend to cancel each other out.

There are several definitions of device failure that are common in the laser diode industry. For the purpose of this analysis, failure is defined as 20% power degradation at a constant drive current. Since the vast majority of these samples had not failed by the time of paper submission, an acceptable means of extrapolation had to be defined. Most of the samples are experiencing a degradation that is approximately linear with time. Therefore, the degradation rate during the last 3 billion shots was calculated and used to extrapolate the data for each sample to a time to failure (TTF).

The TTF data was analyzed using statistical analysis software (MinitabTM). The data was plotted against four distributions (Weibull, Lognormal base e, Exponential, and Normal) in order to determine which distribution had the best fit with the experimental data, and the Lognormal base e distribution was selected for both data sets (single- and four-bar). The resulting reliability plots are shown in Figure 4 and include curves for the 95% confidence interval. The calculated MTTF values are 19.8 Billion shots for the single-bar samples and 14.6 Billion shots for the 4-bar samples.  NGCEO is continuing the life test in order to see if the actual failure times correlate with the extrapolated data presented here. 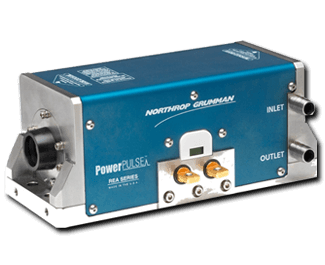 The versions of the PowerPULSETM module that are used in very high-energy systems contain multiple heat exchangers, each of which contains several multi-bar QCW arrays similar to the four-bar samples in the above life test. These modules typically contain between 20 and 200 QCW laser diode bars. Therefore it is of interest to analyze the degradation of the ensemble of four-bar arrays presented above as a single entity, since that is representative of what can be expected of the laser diode arrays in a single PowerPULSETM gain module. This is accomplished by summing the individual power measurements at each point in Figure 3 and then extrapolating the results. This data is shown in Figure 6.

The data presented in Figure 6 indicates that the QCW arrays in a typical PowerPULSETM gain module will fail after approximately 13.5 billion shots if 20% degradation (with zero current turn-up) is used as the failure criteria. It is worth noting, however, that these arrays are designed to reliably operate at considerably higher output powers. Therefore the current could be increased as the arrays degrade in order to obtain longer lifetimes.

A plot of operational lifetime versus repetition rate is shown in Figure 7. This data is based on a product lifetime of 13.5 billion shots as shown in Figure 6 for the analyzed ensemble of four-bar Golden BulletsTM, and assumes continuous operation (24 hours/day, seven days/week). Therefore this graph serves as a guideline of what is expected from the PowerPULSETM line of laser gain modules. For example, at a repetition rate of 100 Hz, the data predicts an operational lifetime of ~ 1500 days. Lifetimes greater than 416 days (10,000 hours) are predicted for all repetition rates < 370 Hz.

Northrop Grumman Cutting Edge Optronics has developed a line of QCW laser diode arrays based on its Golden BulletTM package and high-power QCW laser diode bars. A representative sample of this product line has been life tested and shown to have long lifetimes (MTTF values of 19.8 billion and 14.6 billion shots for single- and four-bar samples, respectively). There were no sudden bar failures during the course of this life test – all samples have degraded gradually.

NGCEO has leveraged the success of its long-life QCW laser diode arrays to create a line of QCW-pumped laser gain modules (the PowerPULSETM product line). These gain modules can be used to create lasers with pulse energies greater than one Joule. Most importantly, they surpass the industrial standard of 10,000 hours of operating lifetime for all repetition rates < 370 Hz. Therefore the advantages that can be obtained by pulse pumping DPSS lasers are achievable without sacrificing product lifetime.