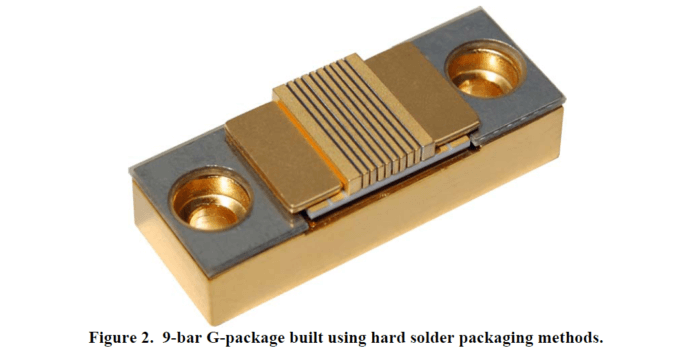 This work focuses on life test matrix of multiple epitaxial structures, multiple wavelengths, and multiple drive currents.  Particular emphasis is given to the 80x and 88x wavelength bands running at 100-300 Watts per bar. Reliable operating points are identified for various applications including range finding (product lifetimes less than 1 billion shots) and industrial machining (product lifetimes greater than 20 billion shots). In addition to life test data, a summary of performance data for each epitaxial structure and each bar design is also presented.

Diode-pumped solid-state (DPSS) lasers are used in a wide range of industrial, scientific, and military applications. The applications include ablation, cutting, welding, range finding, bathymetry, and numerous others. Each of these applications requires different qualities from a DPSS laser, with wide variations in pulse energy, duration, and beam quality within the application space.

Historically, high-energy pulsed DPSS lasers have been obtained by Q-switching a laser medium, such as an Nd:YAG rod or slab, that is pumped by continuous-wave (CW) laser diode arrays. However there are many benefits that can be obtained by using a pumping scheme that utilizes quasi-continuous wave (or QCW) laser diode arrays. QCW laser diode bars can operate at higher peak powers than their CW counterparts. In addition, multiple high-peak-power QCW bars can be packaged into the same area as a single CW bar, due to the lower average waste heat of each bar running in QCW mode. These factors combine to enable compact diode pumps with very high peak powers when operating in QCW mode. In addition, QCW pumping can reduce the heat load in the laser gain medium, which tends to reduce thermal lensing effects and improve laser beam quality.

Northrop Grumman Cutting Edge Optronics (NGCEO) has manufactured CW and QCW laser diode bars and arrays for over a decade. Recent improvements in array packaging and bar manufacturing processes have enabled NGCEO to produce QCW laser diode arrays with lifetimes greater than what is required by industrial applications.

Some of the major historical limitations to QCW array lifetimes have been the processes and materials used to package the laser diode bars. Historically, soft solders (e.g. indium) were used in multiple locations in the array. Arrays built using soft solders are prone to packaging induced failures from solder creep. Advances in packaging methodologies at NGCEO have enabled the creation of the Golden Bullet™ product line. Golden Bullets utilize eutectic AuSn solder and CTE-matched heatsinks to create a package that is less prone to solder creep, and therefore offers much higher reliability and product lifetimes.

A generic representation of the assembly method used for these devices is shown in Figure 1. Diode bars are initially soldered to CuW heatsinks with AuSn solder using a proprietary process designed to generate low-stress bonds and low-smile bars. The resulting part is called a Mounted Bar Assembly (MBA). The MBAs can be individually tested and binned for wavelength based upon the requirements of the application. The MBAs are then soldered together and attached to a BeO backplane and n- and p-side contacts in a secondary operation, resulting in a Golden Bullet package. The Golden Bullets can then be attached to a wide variety of standard and custom heatsinks based upon the customer’s needs. They are suitable for use in water- and conductively-cooled applications.

This packaging methodology has been discussed in previous work [1]. Golden Bullet packages have been shown to be reliable over the full range of ambient temperatures encountered on this planet (-40 ºC to + 70 ºC), and have also been proven reliable at cryogenic temperatures. An example array is shown in Figure 2. 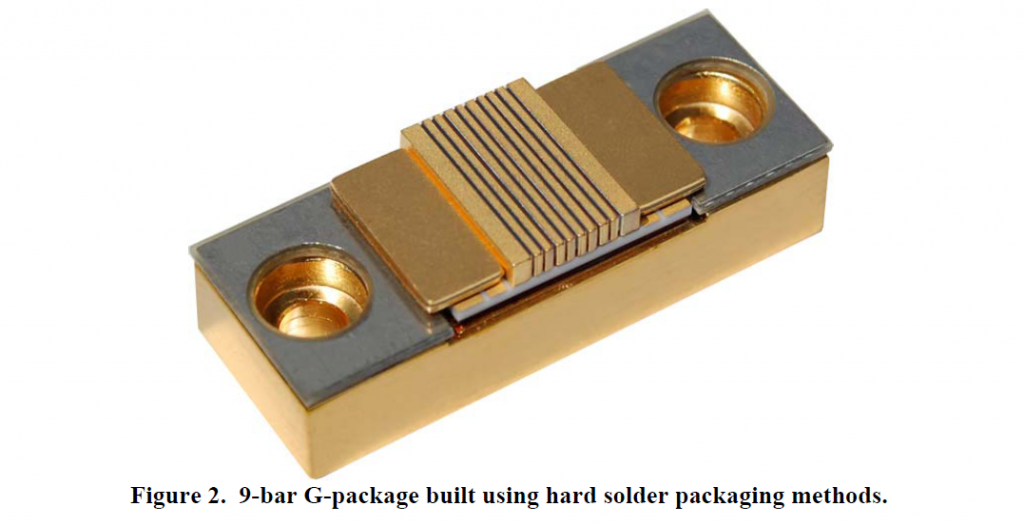 The diode bars used in NGCEO’s high-powered QCW arrays are specifically designed for QCW operation. They have a fill factor of approximately 83% to spread the optical power over a wide area of the output facet and minimize risk of failure by COD. NGCEO’s standard QCW bar has a 1mm cavity length.

NGCEO has previously reported on the status of its standard 80x nm laser diode bars and their reliability. The previous efforts focused on the performance of NGCEO’s standard epitaxial design with its Golden Bullet packaging methods. Recently, NGCEO has developed a new epitaxial structure to further increase the reliable output power levels of these devices. This epitaxial structure contained several advances over the previous structure and included a larger waveguide to decrease the optical intensity at the facet and throughout the cavity.

A comparison of power vs. current curves for QCW bars fabricated from NGCEO’s standard and new epitaxial structures is shown in Figure 3. The standard epitaxial structure resulted in bars with a slope efficiency of ~ 1.25 W/A (at low currents) and a threshold current of ~ 15A. The slope efficiency with the new structure is nearly identical, but the threshold current is increased to ~ 27A. 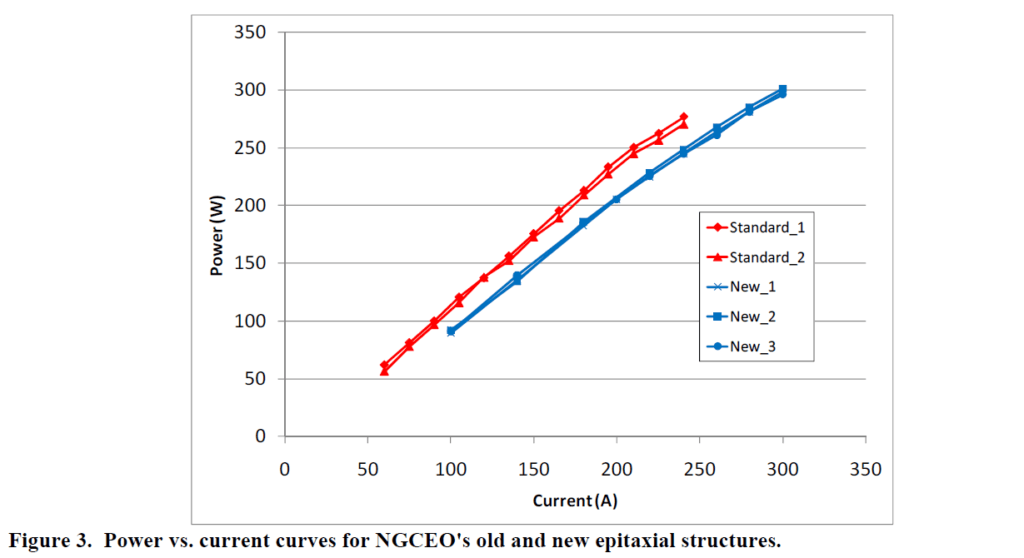 The first life test NGCEO conducted on this material was a step-stress test. Three QCW diode bars with the new epitaxial structure were packaged in single-bar Golden Bullets and placed on the NGCEO life test station. The drive current was increased from 150A to 300A over time. The step-stress life test data is contained in Figure 4. The data demonstrates excellent performance up to 300A (approximately 300W). All data was collected at a repetition rate of 250 Hz and a pulse width of 150 μs using NGCEO eDrive™ laser diode drivers. 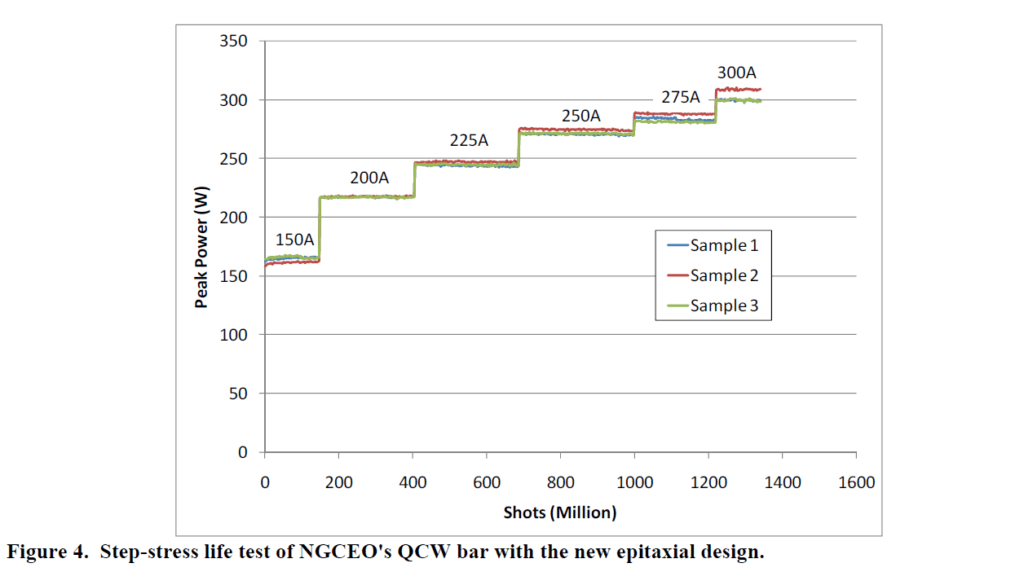 This data is not sufficient to make any claims about expected lifetimes at the given operating currents. However, it does indicate that the material is suitable for low-repetition-rate applications (such as range finding) up to a power level of 300 W/bar. In many range finding applications the product lifetime is in the range of 10-100 million shots. The above test shows that the new structure can survive those shot counts with minimal degradation.

A subsequent life test was conducted with an increased sample size in order to compare the performance of the new and standard epitaxial designs. The test parameters are shown in Table 1. Since the majority of QCW applications involve multiple bars on tight pitch in order to maximize power densities, 4-bar Golden Bullets were selected as the package type for this life test. Therefore the life test represents a good approximation of the potential field use of these diode bars.

A current (as of January 2011) life test graph is shown in Figure 5. The differences in performance between the new structure and the standard structure are striking. The samples built from epi with the standard structure began life with approximately 15 W higher power per bar by virtue of their lower threshold current. The output power remained relatively constant over the first 500 million pulses, at which point a rapid degradation began to occur. By 1 billion shots the samples built from the standard structure had lost approximately half of their initial output power. If the typical definition of diode lifetime is used (20% degradation with zero current turn-up), then these devices have a lifetime of approximately 700 million shots at 200A, with a nominal beginning of life power of 225W. These devices have been previously shown to have a lifetime of approximately 15 billion shots at drive currents of 110A (nominal power =125W). 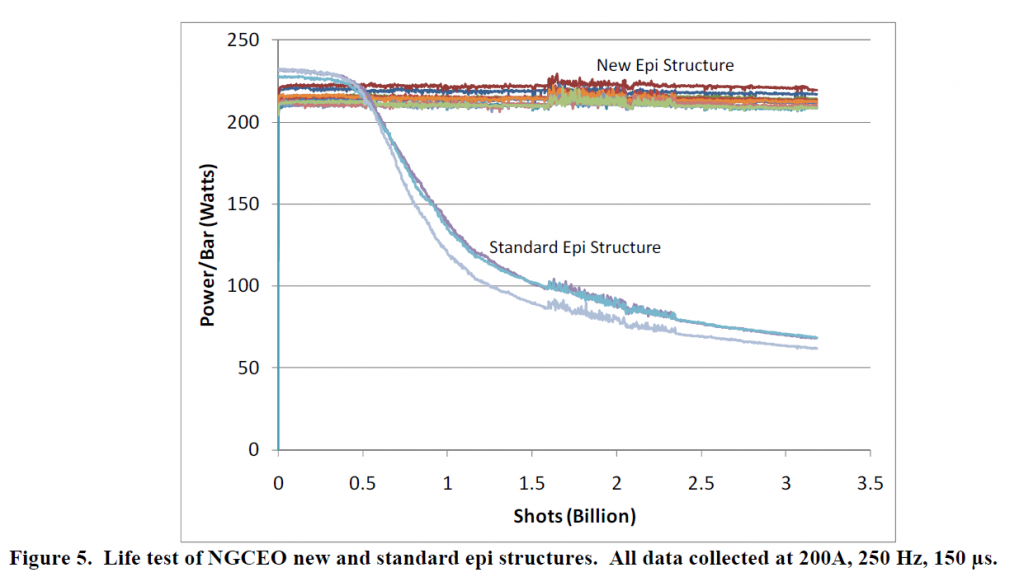 The samples built with the new epitaxial structure have fared far better on life test. There is no measureable degradation over the course of the first three billion shots. As a result, no statistically significant predictions of product lifetime can be made at this point. However this data does represent approximately 140 days of continuous operation under these conditions. It is a fairly safe assumption that these devices will survive for over one year of continuous operation, which meets one of the key thresholds of industrial operation.

NGCEO has employed a similar epitaxial structure in its 88x material for several years. Six single-bar Golden Bullets were place on life test and operated at 250 Hz, 150 us at a variety of drive currents. The results are shown in Figure 6. This test was conducted on the same circuit of the life test system as other tests, so the current was varied over time (primarily between 150 and 200A). The average degradation rate during the 200A portions of the life test was approximately 0.25% / billion shots. This corresponds to an expected product lifetime of approximately 80 billion pulses, if end of life is defined by 20% degradation. While the authors are unwilling to extrapolate by a factor of 10 over the current number of accumulated pulses, a product lifetime of 20-30 billion pulses is a rather conservative estimate. Similar degradation rates have been observed in other experiments conducted at NGCEO on the 88x material. 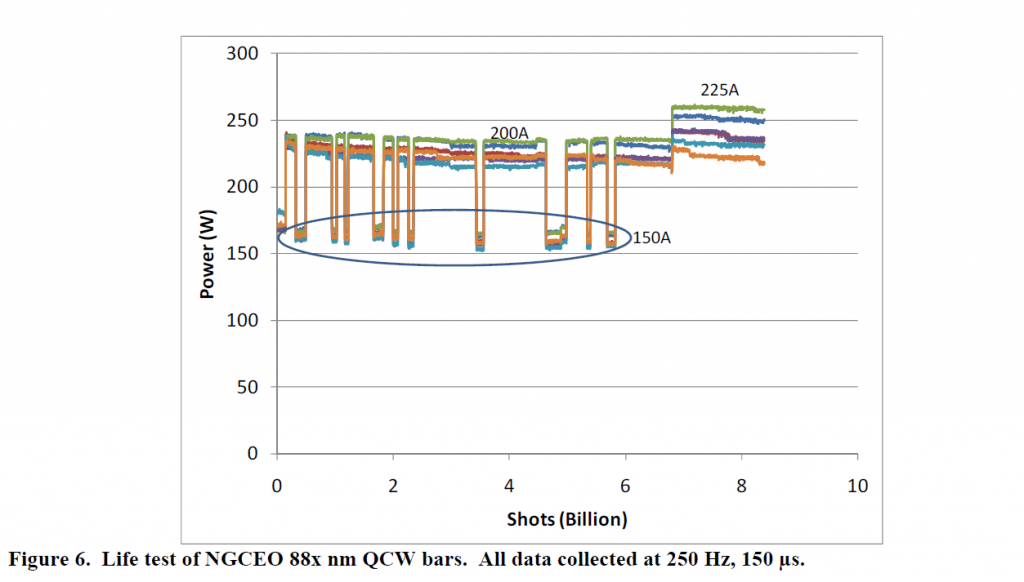 NGCEO has developed a new epitaxial structure that provides reliable operation at QCW powers up to 300 W/bar for 80x nm devices. Recent life tests show no measureable degradation within the first three billion pulses at operating conditions common to solid-state pumping of Nd:YAG and Nd:YLF. A similar structure has been used on 88x material for several years. An ongoing life test shows degradation of approximately 0.25% / billion shots at a beginning-of-life power level of approximately 225 W.

News August 27, 2020
Cutting Edge Optronics (CEO), a subsidiary of Northrop Grumman, specializes in the design and production of high-volume custom laser diode assemblies for a wide...